"Hmm. I think I'm seen something like this before..."

Why do you still want to work with Rails in 2022?
I spent the last few years working on Javascript frontends using React and Elm where Rails served up the backend API. I think I've made prudent decisions regarding tech stacks and choosing to build apps as single page applications, but I've suffered tremendous discomfort with how much longer it takes to get things done when compared with the developer productivity of Rails. Rails 7 came out in 2022 and it takes some interesting turns by abandoning Webpacker and introducing Hotwire. So far I really like esbuild and I'm hoping to put some time in with Hotwire in an effort to understand what the SPA vs. Rails tradeoff is at right now.
What kind of Rails app have you worked on?
In the beginning it was greenfield startup projects such as Gist an app that was an experimental project for Paul Allen of Microsoft fame. Later, I focused mainly on custom ecommerce sites based on Spree. I took on a developer / maintenance role for a large Rails project at Harvard University. The past few years have been a mix of new app development and maintenance of older Rails projects. I think I have a special knack for upgrading terribly old versions of Rails that are still out in the wild by virtue of having worked on all the versions of Rails since it's inception.
What kinds of javascript frontends have you worked on?
Mostly React and Elm. My last Rails position was a Rails app that had both a mobile app and web app done with Typescript and React. I have quite a bit of experience with Elm, a functional frontend that is partly the inspiration for Redux, and I use Elm because it's the most Rails like framework I've found for the frontend, I buily my app with Elm.
Check out WingTask
What kinds of css / design skills do you have?
Making things look good has always been the bane of my existence as a mainly backend developer, and I feel like I finally turned that story around in these past few years. Right now in mid 2022 I think I might even be ahead of the rest of the industry in that I'm creating my own design systems based on web components. What this means is that I'm building what I think are great UIs that are both visually appealing and well constructed. I feel I'm very good with responsive design and I believe trying to conform to accessibility rules is not just morally necessary but also results in better user interface.
Check out my design system
What kinds of database skills do you have?
I know databases from the perspective of an app developer. I know 3rd normal form and all the classic DB features of relational databases. I'm comfortable with writing SQL by hand because that was the only way to do it when I first started. I understand the implications of slow queries that may be inefficient because they are doing whole table scans. Probably the biggest consideration with databases is knowing the tradeoffs of design for fast reads vs fast writes and how that impacts trying to generate reports since most relational databases are designed for fast writes. When using ActiveRecord the most common issues to watch for is not having the right indexs in place and sneaky N + 1 queries. I've never sharded a database so if you are having bottlenecks caused by the DB that would be outside my wheelhouse but I'd be interested in working on it.
What kinds of devops experience?
I've been deploying apps to virtual private servers for the majority of my career, most of the time that means provisioning ubuntu or debian based servers with Chef, and tehen deploying a Rails app with Capistrano and finally serving it up with Passenger and Apache. Sometimes the app server changes to unicorn, puma or mongrel, sometimes Heroku or a container provider was used. With WingTask I have five different servers, the first is a Rails app serving up static content like landing pages, blog, and documentation, the second is the WingTask app itself having both it's Elm frontend and Rails backend being hosted on the same server, the third is a demo server, the fourth is a staging server, and the fifth is a Prometheus / Jenkins server.

This article is about the tech stack I'm using for WingTask in 2022.

I’ve found web components are a game changer when it comes to building user interfaces. I’ve written about them previously regarding the benefits of using them no matter what your framework happens to be but because they offer another way to do javascript interop I think it’s worth discussing some of the special benefits they bring when combined with Elm.

Why Web Components Work For Me

After adopting web components to solve a specific technical hurdle I found them so useful that they quickly became my new favorite browser standard in recent years. Web components are the basic building block of my frontend design system for WingTask, and I’m really happy with the final results I’m getting in terms of the development process and the finished product. There’s multiple reasons why web components work well for me and since they don’t seem to be so popular I’d like to try to explain why I think they should be given wider consideration.

Why I'm Having So Much Success with TailwindCSS

TailwindCSS emerged in the past few years as one of the most popular new developments in the web development sphere. When I set out to build a frontend system for WingTask I chose to use TailwindCSS for reasons that had little to do with utility classes, the most obvious feature of Tailwind, and instead chose it because it also provides a turnkey CSS design system that can be extended for a specific application with the end result being a complete customized design system. In this article I will discuss why I think this prebuilt design system concept is as much a reason to adopt Tailwind as utility classes are.

You can take the views of any Elm app and “mount” them in Storybook UI explorer then create different stories in Storybook that allow you to see the same view in a multitude of different viewport sizes and states. The benefit of this is that it makes it really easy to see how fixes and changes are affecting the visual UI of the view. Rather than having to launch dev tools, pick the right viewport setting, and then going through app functionality to get to the desired state, the combinations of viewport and state of a single view can be represented as a navigable menu where each can be inspected quickly by a click.

Storybook is an Essential Tool

Storybook is an essential tool in my development process for WingTask. I depend on it to be the workspace where I create the user interface . Storybook is self-described as “a tool for UI development”, this vague description is not inaccurate in that storybook seems to have a pretty broad set of use cases it can support.

How I Sketch Interfaces on Pad and Paper

An idea for a new app feature usually sits in my mind for some time before I commit to actually building it. I’ll do some research, jot some notes, and maybe even write a script for how the user process will be, and then when I feel I’m ready to go from abstract idea to concrete concept I’ll pull out a pad and pen and sketch a user interface. I need this first step of concept to sketch to help confirm my idea is fleshed out all the way and also to stop myself from looping in my head over details that I’ve already established.

How I Build User Interfaces for WingTask

The first version of WingTask was built using Material Design and a first It was fine, it allowed me to launch WingTask quickly without having to take on the burden of creating a custom UI. However, not too far after the launch I began to realize it wasn’t the right choice for look and feel going into the future. The biggest problem is that WingTask needed a UI that was platform neutral, since it’s a web app trying to perform like a native app, it’s not really particularly android nor particularly IOS. The problem with Material Design is that it conveyed that WingTask had a preference for the Android platform which wasn’t really the case.

WingTask is an app that provides a mobile UI and sync server for popular opensource CLI application Taskwarrior.

Launched without any announcement, growth is glacial with over 500 users!

“WingTask is decent enough (no affliation)”

Looks good and functions appropriately on mobile, tablet, and desktop. Each view of WingTask is designed to support multiple viewports not just in appearance but also in function.

Progressive Web Apps (PWAs) are web apps that use service workers, manifests, and other web-platform features in combination with progressive enhancement to give users an experience on par with native apps.

WingTask can be installed to the home screen of a device and launched the same as native apps.

Single page applications are too popular in my opinion. The issue is complexity that drives development time to be an order of magnitude longer.

I tried as much as I could to build WingTask as a server side Rails app, but after I functional demo decided that if wanted a web app that had the feel of a native mobile app, then I had to bite the bullet and go SPA. After having mixed results with React, I switched to Elm and am pleased with both the app dev speed and the end results. 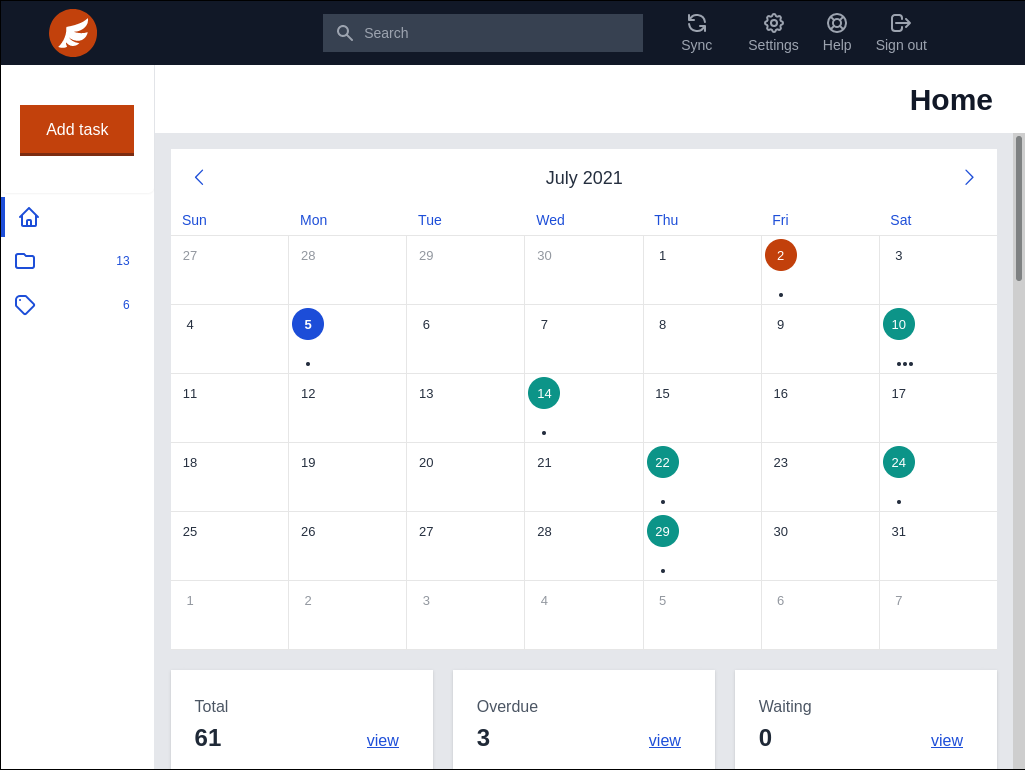 I work through my WA state LLC, Power Up Development LLC